I've been wanting to bake a German chocolate cake for awhile now ever since watching an episode of Throwdown with Bobby Flay on Food Network on german chocolate cake throwdown against Make My Cake bakery in Harlem, NY (Bobby won for those you curious ones).

And I was given the perfect opportunity to when Sanjay asked me to bake a cake for a get-together to celebrate his friends Adam and Laura's engagement. They love chocolate and they are German. PERFECT! Although, German chocholate cake did not get its name because it's from Germany. According to our good ole trusty Wikipedia:

Contrary to popular belief, this cake did not originate in Germany. Instead, the name derives fromBaker's German's Sweet Chocolate, which was created in 1852 by an Englishman named Samuel German for the Baker's Chocolate brand. The original recipe for "German's Chocolate Cake" was sent by a Dallas, Texas homemaker to a local newspaper in 1957. The cake became quite popular and General Foods — which owned the brand at the time — distributed the recipe to other newspapers in the country, and sales of Baker's Chocolate are said to have increased by as much as 73%. The possessive form (German's) was dropped in
subsequent publications, forming the "German Chocolate Cake" identity we know today.

In any case, I wanted a better version of the traditional German Chocolate Cake. So rather than using Baker's German Chocolate, I used a high quality dark chocolate for deep chocolate flavor and buttermilk for perfectly moist, fluffy texture. 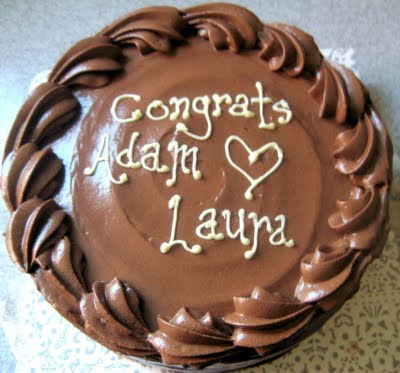 In between these three layers of chocolate cake is wonderfully sticky coconut pecan filling. And the cake got a light coating of airy chocolate frosting to enhance the deep chocolate flavor and add that extra something that just melts in your mouth as soon as you take a bite. 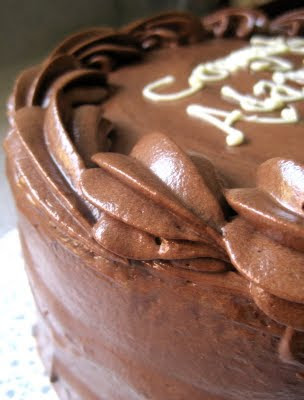 I wasn't able to make it to the party but I was happy to hear that everybody had a good time and enjoyed the cake too. Congratulations Adam and Laura!