I love peanut butter. And I love chocolate. But for some reason, I was never a huge fan of Reese's Peanut Butter Cups...until I made this cake!

My friend Nick's coworker/friend Sasha's birthday was coming up and so Nick requested a cake to surprise her at the office. According to Nick, Sasha (or Sashizzle... what a cool nickname!?) is a huge Reese's fan and apparently, she would time to time mention how awesome it would be if she could get a giant Reese's Peanut Butter Cup cake for her birthday. And so that's exactly what she got!

It took me awhile to think of how to make the cake actually look like a Reese's Peanut Butter Cup. Initially, I planned on using chocolate frosting to create the ridges on the slanted side of the cup. But in the end, I decided to make chocolate lady fingers and cut the tips to pointy ends to mimic the ridges. 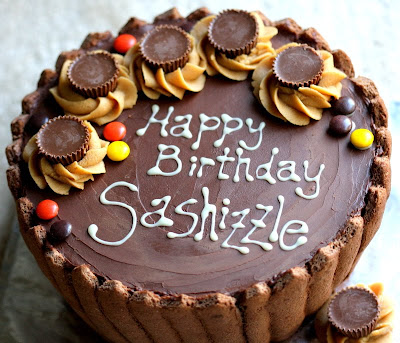 This three-layer cake was a dark chocolate baked with loads of good quality dark chocolate. In between the layers were smooth peanut butter frosting with bits of Reese's Peanut Butter Cup spread across to add some texture. 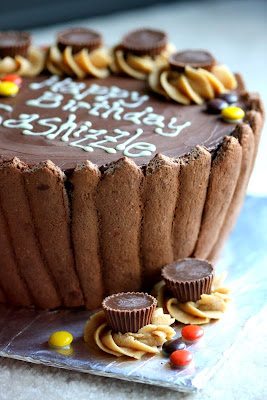 The cake was then topped with dark chocolate ganache to create that smooth top surface like that of Reese's Peanut Butter Cup and to add to the chocolatey goodness. The sides were trimmed to an angle then lined with fluffy chocolate lady fingers dusted with cocoa powder to imitate the ridges. More peanut butter frosting, mini Reese's Peanut Butter Cups, and Reese's Pieces were used for the finishing touches. 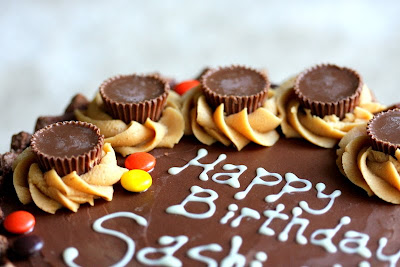 I was very very happy to hear back from Nick that Sasha was ecstatic to receive the cake and that it was exactly what she had wanted! Once again, happy belated birthday Sashizzle!
Posted by Ji at 3:20 PM