My coworker Russ who had ordered the South Park cake for his son Alexander's birthday came back to order some more cake and this time for his wife Donna's surprise birthday (Thanks Russ!). The party was for about 30-40 people so one round cake was not gong to be enough. With some helpful suggestions from Donna's close friends and Russ, we decided to go with a carrot cake, one of Donna's favorite, and pina colada cupcakes seen in my earlier cake posts.

Carrot cake with cream cheese frosting may just be one of my favorite cakes. There are a lot of carrot cake recipes out there that call for crushed pineapple, but they tend to result in overly sweet carrot cakes that hide the subtle carrot flavor. I like my carrot cake with spices, lots of carrots for texture and natural sweetness, and chopped walnuts for extra crunch and nuttiness.

This 9" round carrot cake is a four layer cake. The carrot cake layer itself was extremely moist and light and held the body quite well to be stacked into a multi-layer cake. In between the cake layers was the sweet vanilla flavored cream cheese frosting with a hint of tanginess from the cheese. 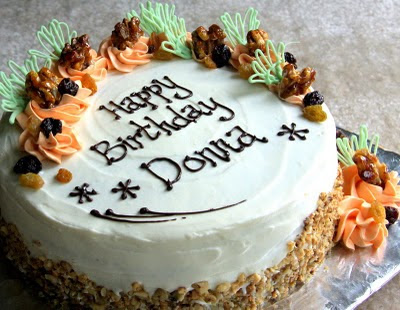 And some golden and dark raisins that have been plumped up to be juicy and soft were sprinkled on the frosting. I wanted to keep the raisins out of the cake batter and include them in the frosting instead just in case the non-raisins fans wanted to pick them out.

I had a lot of fun decorating this cake. I didn't want it to look like any other carrot cakes out there -- usually with chopped walnuts around the side and maybe some orange and green frosting piped to look like little carrots. I wanted to make it look like one of a kind. 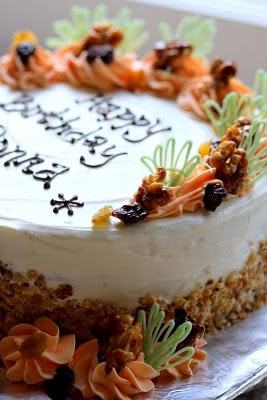 The cake was finished with more cream cheese frosting then piped with some frosting tinted with an orange coloring and adorned with white chocolate decorations with a teensy bit of green color. This was my take on those mini frosted carrots commonly found on carrot cakes. Finally, the cake was topped with homemade candied walnuts and raisins for more color and textural contrast.

As for the cupcakes, rather than using rum flavored cream cheese frosting as I did previously, I decided to frost them with coconut buttercream with a hint of rum flavoring. Since the carrot cake had cream cheese frosting, I wanted to keep the cupcakes different. The fluffy melt-in-your-mouth frosting and the creamy pineapple custard filling proved to be a perfect combination. 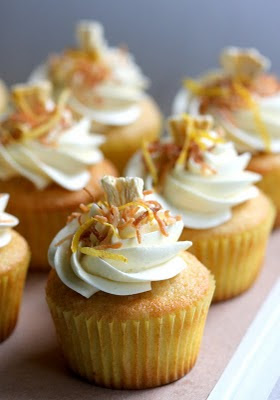 Another change I made to these cupcakes was that I put some fresh lime zest into the pineapple custard filling. This added a whole other dimension of freshness to the sweet tangy filling that made these pina colada cupcakes taste like the real thing -- or actually better!

Thanks Irene and Lisa for all your helpful inputs and Russ for ordering once again!