When Jon asked me to bake a cake called St. Honore for his mom, I had no idea what he was talking about and neither of us knew how to properly spell it. Huh? St. Onerie? Onoray?

After googling and poking around, I found out that it was a cake named after St. Honore, the French patron saint of bakers and pastry chefs. (How cool is it to be a saint of bakers??) It was more like a pastry made with puff pastry dough and pate a choux (cream puff) and not the traditional cake we know. It was the cake that Jon and his mom used to buy at a bakery way back when but no longer to be found. He wanted to surprise her on her special birthday with a cake very fond in her memory.

I began to study the different recipes, video clips of how to assemble, baking books, and online blogs to learn about this mysterious cake that I had never heard of before. It was daunting to make something for the first time, but an excitement of delving into a whole new pastry world soon took over the fear.

The very bottom of this cake is a layer of puff pastry with pate a choux (cream puff dough) squeezed out in circular pattern on top creating a wall around the edge and then baked to golden brown, crispy, flaky beauty. I briefly thought of using a store bought puff pastry but decided to make my own from scratch because I wanted to keep everything homemade and entirely Cakes by Ji. 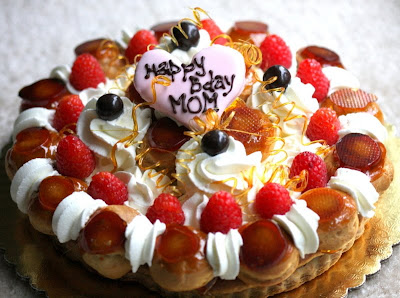 Small cream puff rounds were baked and then some were filled with vanilla and others with raspberry custard cream lightened with whipped cream. A generous amount of the cream was spread out onto the baked puff pastry layer. This sweet cream filling was so irresistibly light that I couldn't help myself from sneaking in a spoonful here and there while making it. The cream puff rounds were then dipped in hot caramel and set around the round puff pastry creating a crown using the caramel as a "glue". The cake was adorned with lightly sweetened whipped cream, swirly caramel decorations, fresh raspberries, and dark chocolate covered malt balls. And last but not least, a heart-shaped flaky pastry dough was covered in pink icing for a personalized message.

The crispy flaky puff pastry layer with rich yet light custard filling, and small cream puffs with a sweet crunch from the caramel and bursts of cream filling inside make this cake perfectly fresh and unique.

Jon kept me updated via texts during the birthday candle celebration of his mom's reaction and how happily surprised she was to see the cake. Seeing a picture of her holding the cake with a big smile makes me love baking even more. And now, St. Honore cake has been permanently added to my baking repertoire!