This cake is one of my favorite cakes to date for two reasons. I recently just fell in love with chiffon cakes because they are fluffy and not too rich and they can be eaten straight out of the refrigerator. This is unlike butter based cakes that are required to come to room temperature for the best taste and texture. Chiffon cakes use oil instead of butter and is lightened by folding in beaten egg whites which result in light, airy texture. Did you know that the chiffon cake recipe was first revealed to the public by Betty Crocker in 1984? This was nearly 20 years after the recipe was first developed by some caterer and kept it a secret!


Anyhow, so I love chiffon cakes and this cake uses them. The other reason why this cake is dear to my heart is the birthday girl's reaction to the cake and how much she enjoyed it.


When my roommate Erin's coworker, Mac asked for a cake for his sister's birthday, none of us knew what kind of cake was in order. Erin and I scrambled to get as much information as possible about Zeena through Mac and also her friend. Zeena loves poems and she's a wonderful poet herself. One of her favorite poets is Sylvia Plath. She loves music and often writes reviews of up and coming bands. And she likes strawberries.

I thought about putting some musical notes on the cake - veto. Not interesting enough. I also thought of maybe I can try to write out a short poem on the cake - nope. Not enough space on the cake. Maybe write her a cute, birthday rhyme? Er, I'm not very poetic. After churning through a number of ideas, I finally decided on doing a message in a bottle theme. The idea was to print out a poem by Sylvia Plath, roll it up and put it in a little bottle to be put on top of the cake.

But all this was assuming that Michael's would carry little tiny glass bottles with cute cork bottle caps that I had pictured in my mind. Of course, all I could find was a bottle that was roughly the size of a soda can that clearly had no place whatsoever on top of a cake. After running around the different aisles at Michael's, I found these little plastic tubes full of tiny colorful beads that I ended up using in place of a glass bottle and a cork bottle cap that I then glued on the white plastic cap of the plastic tubes. With a final touch of a piece of ribbon, the "glass bottle" started looking pretty convincing.

I don't know why I picked that poem and I don't know much about poems to begin with but for some reason, I picked Sylvia Plath's Mad Girl's Love Song. I printed the poem out on a lightly pink hued paper, rolled it up and tied it up with a ribbon and placed it in the bottle with a little bit of the colorful beads. 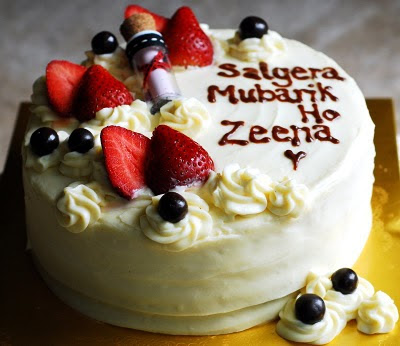 This cake is composed of three layers. The cake itself as I mentioned before is a vanilla chiffon cake moistened with strawberry puree. Between the layers are generous amounts of fresh strawberry slices and light mousse infused with vanilla beans, providing the perfect "strawberries and cream" combination, but not overly rich or sweet. 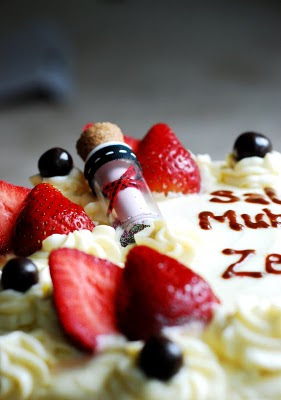 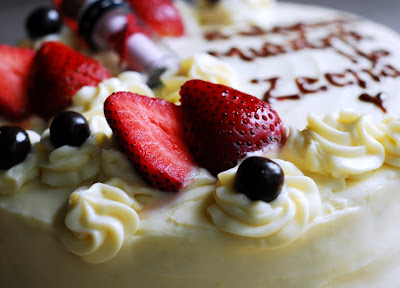 I was absolutely thrilled to find out that Mad Girl's Love Song actually happened to be Zeena favorite poem and that she was deeply touched by it! I feel so blessed that I get to play a part in making someone feel special on his/her birthday by doing what I love.