Shortly after Zeena's cake, Mac proposed another exciting project for me -- his wife Sonia's birthday cake! This time, he made an interesting suggestion for the cake design. With Sonia's love of reading books and especially the Twilight saga, the idea was to make a rectangular cake that looks like a book with one page from a Twilight book and the opposite page displaying a birthday message. This sounded like a brilliant idea except what makes a rectangular cake look like a book and what makes a page look like one from a Twilight book? Having seen the movies, I had a vague idea of the different characters and the general story, but I was completely lost on what makes something Twilight-y. And this is where Google image search came in handy of course. 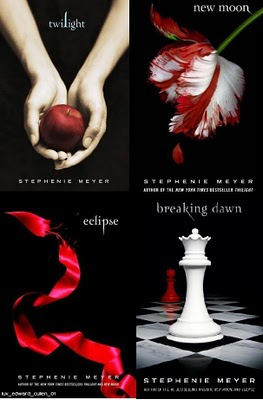 So I found images of a luscious looking red apple, red and white flower petals, red flow-y ribbon and lastly, red and white chess pieces on a chess board. I was trying to think of the different ways to make these items edible decorations for the cake. I could use marshmallow fondant like I used for my Google cake and color it red, but decided against it since I wasn't quite confident with my skills in working with fondant yet. And instead, I used my favorite moldable medium Crayola Model Magic to make the flower petals and the chess pieces and colored them red. If you've never used this clay before, do yourself a favor and try it the next time you need to mold something! It has this funky texture like marshmallow, very easy to work with, super light in weight and dries beautifully.
The Twilight cake is composed of chocolate chiffon cake layers made with just the right amount of chocolate resulting in a light textured cake that's not too rich or too chocolate-y. This was to not overpower the delicate, subtle vanilla mousse and fresh strawberries layered between the cakes. Because Mac and Zeena enjoyed the strawberry chiffon cake so much, I wanted to make this cake similar but with chocolate incorporated into it since Sonia loves Cadbury chocolate. The cake was then frosted and decorated with white chocolate frosting. 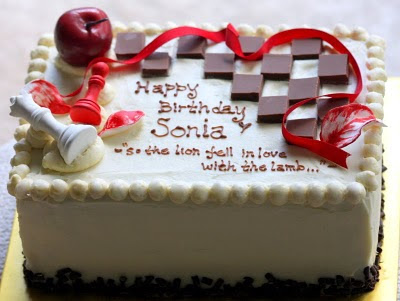 I also wanted to somehow incorporate the chocolate in a creative way rather than just including them in the cake layers. So the Cadbury chocolate bar cut into little rectangular pieces was used to make the chess board on top. 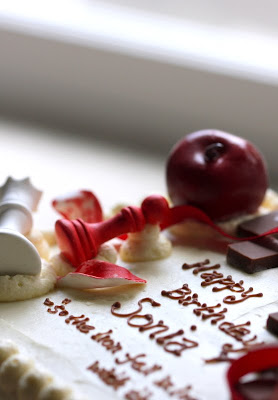 Oh by the way, I learned something new about Cadbury chocolate! Mac informed me that Cadbury chocolates manufactured in the US tastes differently from the ones made in UK! And Sonia favors the UK ones and they can be purchased at Cost Plus World Market for those curious ones out there. I would think that the chocolate recipe is unified across all the different Cadbury factories so the difference in taste must come from the subtle differences in the ingredients - their origins, taste, quality... etc. Interesting.
Anyhow, the cake was topped with a tiny little plastic apple, the chess pieces and flower petals I made out of clay, and a piece of red ribbon. Last but not least, I dug around the web some more and found this famous love quote from Twilight that any Twi-hard fan would instantly recognize along with a birthday message. I was happy that Mac immediately got it when he saw the cake! 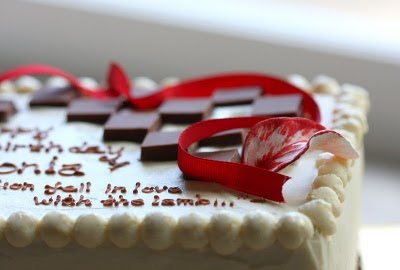 So you might have noticed by now that the cake actually ended up not looking like a book. I realized after I had baked the cake and assembled it that the top surface was just not large enough for me to make it look like an open book and do all the things I wanted. I didn't want to waste the precious real estate on top to split in half to look like two separate pages. So I just decided to give up on the book idea.
Nonetheless, I was very pleased with how the cake turned out and even happier to hear from Mac that Sonia and others enjoyed it. Thanks Mac and I am looking forward to more interesting projects from you in the future :)
Posted by Ji at 11:35 PM