My dear friend Lisa and her fiance Sihong are finally getting married this coming Saturday! I cannot believe it's coming close to 8 years since Lisa and I first met each other at our freshmen dorm. It makes me feel very very old. We share many many memories including going squirrel fishing in the main quad with a stick and a string with a peanut tied to the end of it.
Last year Lisa and Sihong asked me to do the honor of creating their wedding cake. At first, I had to turn it down because I felt like my technical skills as a baker were just too far premature to take over such a big project and I also did not want to be the one to potentially ruin their wedding! But after some more convincing by Lisa and doing some researches on how to make wedding cakes, I decided to take on the challenge. I still get mad chills thinking of the different scenarios where things can go wrong on the wedding day, but I've been preparing slowly for the big day -- lots of reading, shopping for the right tools, detailed planning and testing.
Two weeks ago, I hosted a cake tasting for the couple. I had given them a list of about ten different cake flavors and from the list, they picked two to taste. One with yellow cake, strawberries, crispy meringue layers paired with vanilla buttercream and the other with chocolate cake, crispy mocha bits paired with caramel buttercream.
A pleasant surprise came along as I was preparing the caramel buttercream with the help of my trusty friend Penny. I was a bit flustered trying to make the many different components of the two types of cakes and managed to put in too much sugar while making the caramel to whip into the buttercream. And of course with the wrong sugar to water ratio, the caramel became too thick, almost to the consistency of candies as it cooled down making it totally unusable for the buttercream. Instead of being bummed about the failed attempt at making the buttercream, Penny and I got excited about this opportunity to make caramel candies. I rummaged through the pantry and found some roasted almonds and sea salt and quickly mixed them into the thickened caramel. The result was an absolute deliciousness. Now I know how to make salted caramel candies! 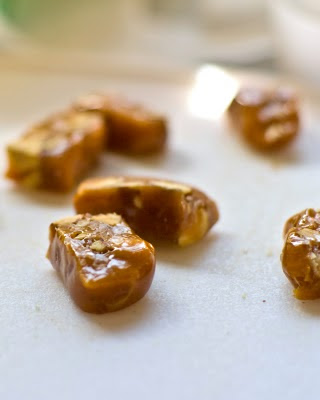 Anyways, back to the cakes. 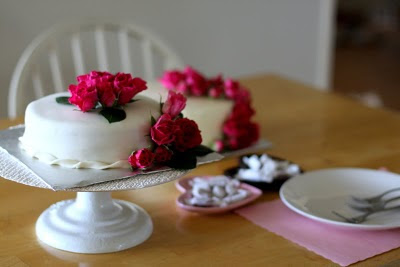 This first cake was a strawberry vanilla meringue cake consisting of 4 layers of classic yellow butter cake. The cake layers were generously brushed with simple syrup infused with vanilla beans to keep the cake moist and add an extra layer of flavor. Between the bottom two layers is light and fragrant vanilla buttercream with slices of fresh strawberries. Then, a layer of crispy meringue disc together with some more buttercream was placed in between the second and third layers for the extra contrast in texture. 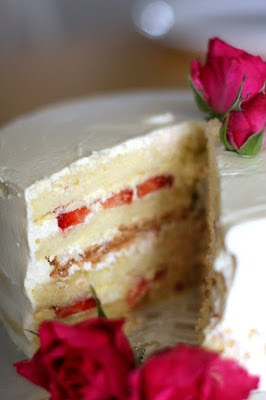 Finally, some more vanilla buttercream and fresh strawberries between the third and the top layer of cake and finished with some more of the same frosting. 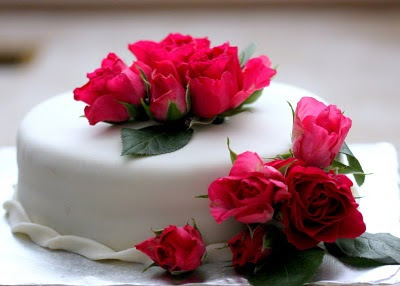 The second cake was a rich dark chocolate cake with crunchy mocha bits and caramel buttercream. This cake also consists of 4 layers with nutty but subtle caramel buttercream and crunchy bits of mocha candies sprinkled on top between the layers. 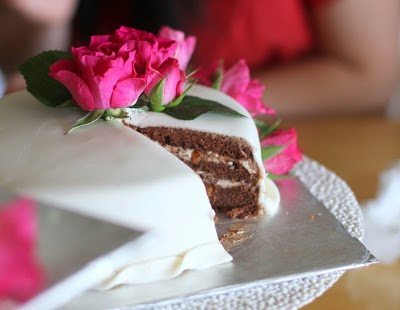 Because we wanted the cake to be white on the outside, I covered it with a homemade marshmallow fondant layer which gave it the perfectly smooth silky texture. 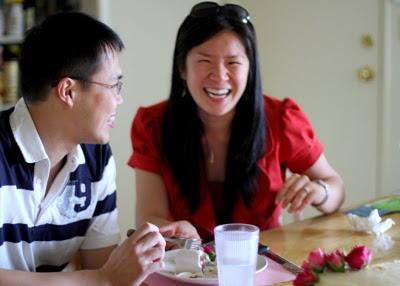 After tasting, we decided on the vanilla strawberry meringue cake which had the fresh, light and summery taste that we all liked. Just look at how happy the soon-to-be married couple looks!
I'll be posting my wedding cake progress leading up to the wedding day so tune in and wish me lots and lots of luck everybody!
Posted by Ji at 11:02 PM