Erin Bell was referred to me by my dear friend and freshman roommate from college Kelly Schmutte. Kelly is one of the most talented and kindest people I know (I miss you!) so I was very strongly compelled to work with Erin for her wedding coming up in July even though I had never met her before.

I am going to take advantage of this moment to show off how amazingly talented Kelly is. As a ballerina and a designer, she developed a brilliant product idea that she worked on during her course at Stanford and turned it into a company! Check out: http://www.perfectfitpointe.com/.

Anyhow, unlike the grand four tier cake I created for Lisa and Sihoong, Erin requested for a smaller cake and little cookies to accompany it. I was relieved to hear this because I wasn't sure if I was ready to take on such a large project yet. Of the several choices I provided, Erin selected two cakes to taste: blackberry lemon cake and strawberry meringue cake. I also wanted to give her a few choices for the cookies and knowing that some people are not fans of chocolate (what?!), I decided to make jam-filled cookies as well as chocolate sanwich cookies with several different choices of fillings.

The blackberry lemon cake was a four layer of vanilla yellow cake with a touch of fresh lemon zest. The cake is butter based so it holds up nicely when stacked yet has fine moist crumbs with a very light texture. The first layer of the cake was brushed generously with lemony simple syrup and spred with some homemade fresh blackberry filling. The blackberry filling was simply fresh blackberries cooked down with sugar until the berries break down and thicken into a jam-like consistency but much fresher than a store-bought jam. The second layer of the cake moistened with more syrup was stacked on top and topped with lemon curd made with freshly squeezed lemon juice and perfumey lemon zest. The combination of blackberry and lemon was so good that I kept sneaking in spoonfuls of lemon curd with the filling while assembling the cake!

The third layer was topped with some more blackberry filling and the final layer of the cake. The assembled cake was coverd with light meringue buttercream infused with vanilla. 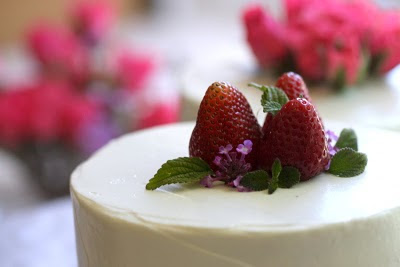 The second cake was similar to the first one with the vanilla yellow cake as its base, but rather than blackberry and lemon curd filling, it was filled with fresh strawberries and a crispy meringue disc with some more buttercream between the cake layers. The cake was finished off with more vanilla buttercream. 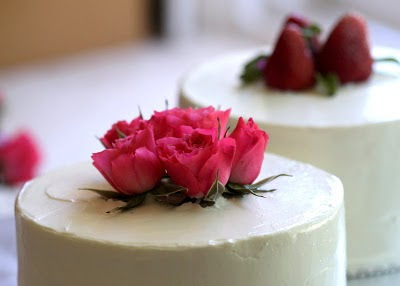 Now for the cookies, I made a trio of jam filled cookies - apricot, raspberry and blueberry filled cookies mashed together to form one little jewel-like piece. I wanted to differentiate my cookies from the jam-filled cookies commonly sold in the markets. The trio cookies did not only look fun and pretty but also created a burst of sweet fruity flavors in the mouth when bit into it. 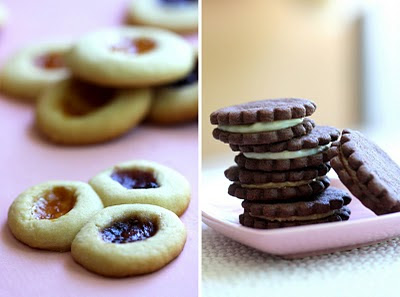 For the chocolate lovers, I baked thin crispy chocolate cookies that had the deep rich chocolate flavor densely packed into them. The sandwich cookies were filled with several different fillings of white chocolate ganache, peanut butter frosting, and dulce de leche. Each one was delicious in its own way, but after tasting them, the bride and the groom-to-be picked out the white chocolate ganache as the winner. 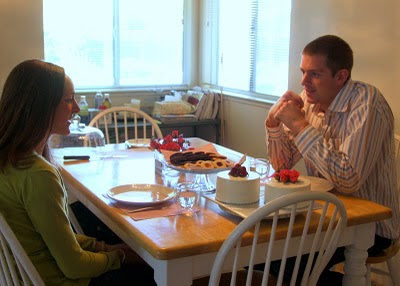 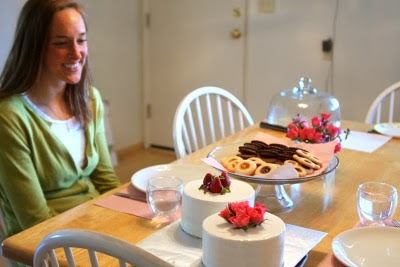 As for the cakes, they went back and forth between the two choices. The fresh fruit fillings and the light texture made both of them the perfect choices for a wedding on a hot summery day. After much deliberation, they decided on the blackberry lemon cake. I am very excited about their choice since I get to make something different from Lisa and Sihong's wedding cake! 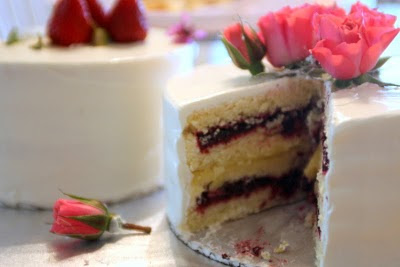 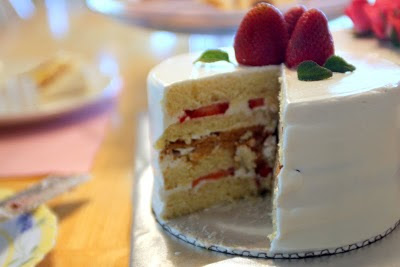 I am looking forward to their wedding day which is actually creeping up really fast now that I think about it. Time to get rolling on churning some buttercream out!