On a perfect summer day a month and half ago, my roommate Erin's older sister Tracy had her beautiful wedding at their parents' house up on a hill in Saratoga. The wedding ceremony was held at their backyard which was completely re-landscaped and transformed into a stunning wedding venue with a hilltop view and freshly laid grass. And then it was followed by brief refreshments and picture taking sessions and a reception at a country club afterwards.

My job was to make little baked refreshments to go with pearl milk tea (what a brilliant idea!) that was being served at the ceremony site. I did not want just one kind of baked goodie, but a variety - maybe something for chocolate lovers, something Asian to go with PMT and something else that was fruity.

I baked up a storm in my small kitchen for a couple of hours and churned out about 400 servings of:

Green tea sandwich cookies with white chocolate ganache filling - these were made with real Japanese Matcha powder to give that fragrant green tea flavor and the vibrant green color. They were sprinkled with a little bit of turbinado sugar for an additional crunch. The sweet white chocolate provided a good contrast to the tiny bitterness of the green tea. 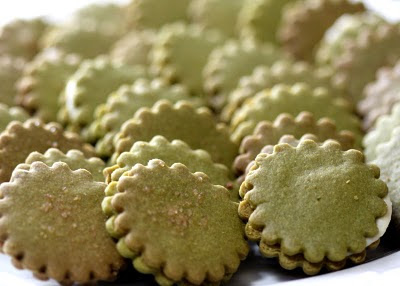 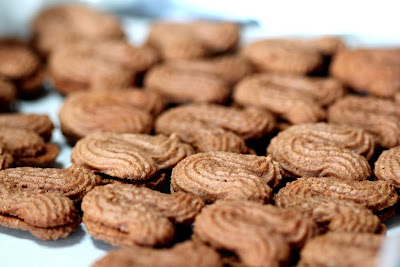 Tangy lemon bars - The creamy filling was sweet and tangy from the fresh lemon juice and provided a nice textural contrast from the crispy nutty crust on the bottom. These bars were made in a large sheet pan then cut into sizes. They were adorned with powdered sugar and little tiny edible gold stars. 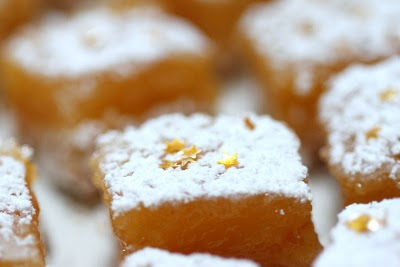 The wedding was perfect. It was not too big, very intimate, and simple yet elegant. I'm glad I got to be a part of it and I was very happy to see everyone enjoying the treats. 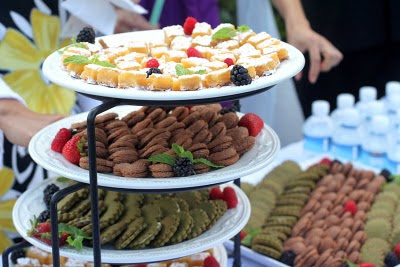 Special thanks to my trusty assistant and my roommate Petunia. 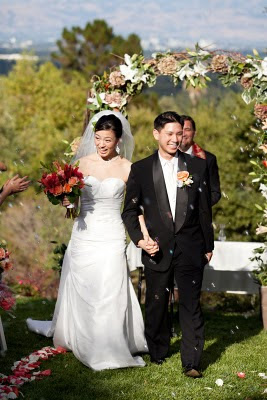 
He's developed a very sophisticated palate over the year. He loves hummus - all kinds including spicy and roasted garlic ones - avocados and he absolutely adores bananas. He often devours one as an appetizer before he drinks his bottle of milk.

So for his first birthday party at a park, I decided to make banana cupcakes, but I didn't want plain ole banana cake. I wanted to jazz it up with some special filling and decorations on top.

The cake which had spongier and lighter texture than butter-based cake was banana chiffon cake with a generous amount of mashed bananas incorporated into it. The cupcake was then filled with creamy, rich dark chocolate pastry cream and then frosted with a light cream cheese frosting infused with vanilla beans. 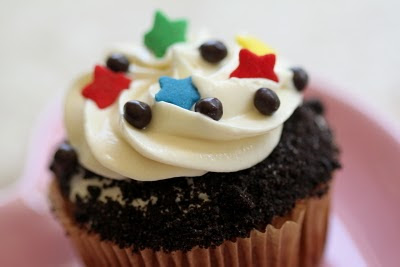 To make the cupcakes more fun and to add more interesting textures, I coated the sides with crushed oreo crumbs and then topped them with little colorful star shaped candies and crunchy chocolate pearls.

After singing him his very first Happy Birthday, he dove right into the cupcake that was as large as his head trying to take a bite with his tiny little itsy bitsy mouth. So adorable! 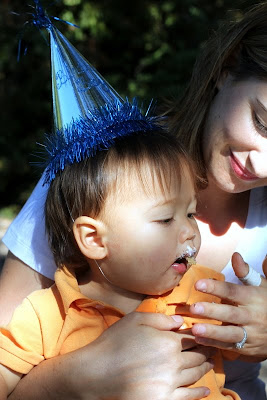 Continuing with the birthday extravaganza, for Rick's birthday celebration at Grill'Em (a grill your own steak place), I wanted a cake that's not too rich after a gigantuous steak feast. And Rick usually does not like anything "weird" in desserts meaning no dried fruits, no ginger, or no strong spices. Generally things with chocolate win him over. So I decided to make Boston Cream Pie which is actually not a pie but a cake filled with custard and frosted with chocolate. 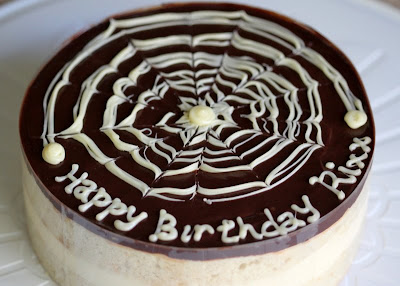 It was a two layer of sponge cake with creamy vanilla custard filling in between. I dabbed the cake layers with a bit of Kalhua to infuse some more flavor and also to add to the birthday festivity. The cake was finished off with a layer of rich dark chocolate ganache on top. Overall the cake was perfectly light but with that little bit of chocolate richness at the end. 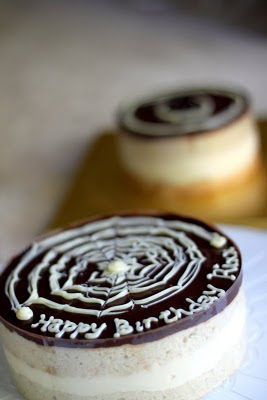 I ended up with some extra of all the cake components so I made a mini Boston Cream Pie!